Oooh, how I love stuffed cabbage with lemony flavors, especially when heightened and accentuated with extra-tartness with the magical and surprising addition of  “sour salt”, also known as "citric acid" (which you are familiar with if you make food preserves and jams or clean your home ecologically). This is my grandmother’s way and my mother’s way of making these cabbage rolls. Tart all the way and I’m continuing the tradition …

Called “lahanodolmàdes” or “sarmàdes” in Greek, these and other modified versions of these cabbage rolls are prepared in most of Northern Greece and the neighboring Balkan as well as Anatolian countries.

Why add citric acid ? It seems unusual but it allows extra tartness without watering down the other flavors of the dish with too much lemon juice or the bitterness of zest.

Let’s go back in time. It’s true that lemons are available all year round and are relatively inexpensive today but try to imagine a little village in the north, at the foot of Mount Olympus, almost a century ago,  with little access to fresh fruits and vegetables in the winter except for an abundance of potatoes, cabbages, onions carrots and apples. I assume that the sour salt was plentiful and inexpensive and helped with food preservation and replaced the lemon juice in savory dishes as well as in fruit preserves. Either way, it adds “kick” to the dish !

And yes, citric acid is also used for home cleaning purposes too, just like baking soda and vinegar, so get a large box of it soon !

Let’s get back to the ingredients used here.

Savoy cabbage or green curly cabbage is easier to work with because it is less tightly packed and less dense than regular white or green cabbage which is why you’ll need a very large one. The leaves are easier to peel off, once blanched and you’ll get a gradient of greens, from dark to light green, so visually it’s nice.

Instead of adding too much lemon juice or zest, I use citric acid / sour salt but also salt-preserved lemon. This could have been an option in the past too but only in North Africa, did they know how to preserve lemons in salt in those days and the idea never extended northwards.

Some people use only lamb or veal or beef or pork, but I prefer a half-half combination of cheaper pork and less cheap veal, but either way, aim for fatty meats and if you grind your own meat, save the bones for the broth.

As for the extra flavorings, I prefer only flat-leaf parsley and no dill here, which I would reserve for stuffed grape-vine leaves called “dolmades” and made in the summer with fresh and tender young leaves. And don’t forget the cumin, lots of it, even though I also add some caraway and fennel seeds for more complexity.

A flavorful simmering liquid will change the final result. Instead of using only lemon juice and the water that you boiled the cabbage in, try to create a broth using all the flavors that will be part of the dish with a few extras in the broth to develop it (like some carrot and celery). You could also use some regular homemade vegetable broth or stock as a replacement. I’m just trying to be thrifty and less wasteful during these interesting times.

And finally, the "avgolemono" egg-lemon sauce is more of a visual contrast and a nice presentation idea but doesn’t make such a large contribution to the dish. I sometimes make it and sometimes don’t. It’s up to you.

The dish only takes about 1 hour active time to make and 2 hours to simmer but goes a long way and we had enough for 4 days and didn’t get tired of it, so give it a try. 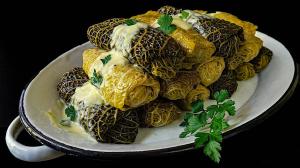 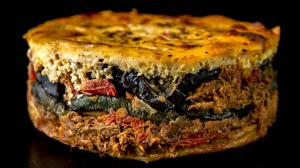 A TRIPLE-MOUSSAKA means using all 3 customary vegetables such as 1 layer each of fried or roasted potato slices, zucchini slices and eggplant slices with 2 layers of triple-meat sauce (not ground...