A 'traditional' TZATZIKI should be denser, drier (thus less wet and runny, so-to-speak) and more concentrated in texture (thus chunkier) and in flavor (especially if made with goat’s milk and/or sheep’s milk yogurt too) and the ultimate texture test is that a spoon placed upright in its center, should be able to remain that way, (like a brave "evzones" soldier guarding the fortress).

It’s a question of expectation and perception and custom. Is it a dip ? Is it just served as a condiment or as a side-dish to a main dish of something else ? Are you imagining it as part of a bigger picture ? Can it be a stand-alone preparation ? Is it tasty enough on its own ? Can it be the main dish when served with a side-order of bread or cooked vegetables ? For me, TZATZIKIis enough and sometimes it’s all I need.

Tzatziki, when fully or partly made with sheep or goat’s milk is quite fantastic, quite ‘old school’ and almost fresh-cheesy, but many are not fans of those flavors. I remember over a decade ago, in a mountain-top village in the south of France, enjoying a divine ice cream made with crème fraîche from either goat’s milk or sheep’s milk and I’ll never forget that magnificent taste.

These are flavors we seem to have abandoned, preferring more neutral cow’s milk in our western cultures. Hotter and drier countries in the Mediterranean don’t have many cows and privilege raising sheep and goats that can withstand the drier climate and sparser vegetation. It’s the natural way of doing things.

I’ve talked about tzatziki in the past and I’ve shown you how to make a quicker and easier, less thick version ideal for dipping, and I’ve shown you both white and green tzatziki too (see recipes here) but the truth is that tzatziki wasn’t really meant as a dip for chips but my older version recipe is actually better for that purpose because it’s liquid enough to avoid snapping that potato chip (even thicker and ridged versions) in half.

A true tzatziki should thicker than a salsa, even thicker than a guacamole. It’s density is closer to a thick ricotta or hummus. It can be the main star of a meal, if served with just bread (grilled pita or otherwise) and roasted or fried vegetables. But to achieve this density, you have to strain everything really well (up to 50%), either by letting it sit overnight (for the yogurt) or pressing it by hand (for the grated cucumber) and the rest is just assembling and waiting for the flavors to blend. It’s still easy and effortless to make and assembled in under 15 minutes, but many good things require patience and have to be given time to become what they could be.

I’ll leave it up to the returning vacationers to bear witness to my statements and perhaps test it out at home themselves, since many are just returning from holidays abroad, perhaps from Greece, Cyprus, Turkey and other Eastern Mediterranean lands with their own stories and memories of a truly traditional, much thicker & chunkier & tastier tzatziki, because it’s still fresh in many people’s minds. Perhaps they ate some in a welcoming home or in a Greek village or island ‘taverna’ or anywhere that is more authentic than a supermarket selling a runny, almost gelatinous version !

You get the picture ? If not, just imagine a clear, blue sky, a beating sun, a turquoise sea, white-washed walls, beaded curtains swaying in a breeze, a clanking bell around a goat’s neck chewing on grass in the distance, a tiny green lizard rapidly running across the paving stones while chasing a dragonfly and perhaps the popping sound of an ice cube, breaking in two, in a glass of ouzo.

*greek expression to say hello & to your health & good-bye. 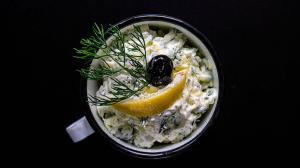 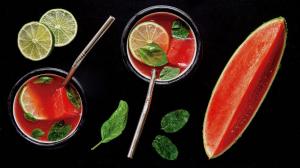 … with ginger ale too of course, for the bubbles and to lighten it up somewhat “decently”. And if you make the granita now before noon, it’ll be ready for cocktail...