What could be better than having 1 or 2 homemade and ready concoctions similar to these complex aromatic syrups, at hand, for that little personal “extra” touch to liven up a warm drink, cold cocktail or a holiday dessert. It may be a party-saver/lifesaver if you’re having guests and need something special at the last-minute.

THERE are 2 aromatic syrup recipe proposals to be prepared here but I recommend that you make both since the 2 are so aromatically different from one another. Just take a look at the ingredients lists for each and you’ll understand why ! Of course, their purpose is to sweeten (as smoothly and silkily as possible without crystallizing) like a simple sugar syrup or a thicker “gomme syrup” is supposed to do … but they’re so much more complex and deeper in intensity.

Both are preparations with a long list of ingredients (fruit juices and peels, various sugars and honeys, herbs, spices and resins) that require macerating and boiling to extract the most flavor out of them and to blend them, followed by straining, re-boiling, thickening and finally bottling.

There are 3 optional ingredients that may seem unfamiliar to you and may not be that easy to find (if you’re not Greek nor Mediterranean nor Middle-Eastern and if you don’t have access to a Greek, Turkish or Middle-Eastern grocery store) but I’m going to provide you with some explanations about what they are and why they’re used and how they’re important (and sometimes replaceable).

MAHLEPI : also known as Mahlab, Mahleb or Mahalepi is an aromatic spice made from the seeds of a species of cherry, (the Mahaleb or St Lucie cherry). The cherry stones are cracked to extract the seed kernel, which is about 5 mm in diameter, soft and chewy on extraction. The seed kernel is ground to a powder before use. Its flavour is similar to a combination of bitter almond and cherry and similar also to marzipan. Mahleb is used in small quantities to sharpen sweet foods and cakes. In Greek cuisine, mahlep is sometimes added to different types of holiday tsoureki breads, including Christmas bread, the New Year's vasilopita and the braided Easter bread called cheoreg in Armenian and paskalya çöreği in Turkish.

*substitution : a small piece of marzipan can be used instead or a few drops each of almond extract & cherry extract but it’s a relatively inexpensive ingredient at 4€ for 25 grams.

MASTIC RESIN : Mastic is a resin obtained from the mastic tree and  it is sometimes called "arabic gum" (not to be confused with gum arabic). In Greece, it is known as the "tears of Chios," being traditionally produced on that Greek island, and, like other natural resins, is produced in "tears" or droplets. Originally a sap, mastic is sun-dried into pieces of brittle, translucent, yellowish resin. When chewed, the resin softens and becomes a bright white and opaque gum. The flavor is bitter at first, but after some chewing, it releases a refreshing flavor similar to pine and cedar. It is commonly used for baking and cooking, adding its aroma to foods such as brioches, ice-cream and other desserts.

*substitution : a relatively expensive ingredient at 7€per 10 grams but you can try substituting it with a few drops of scots pine or stone pine food-grade essential oils or mastic tree (pistacia lentiscus) essential oil or even or 12 (1 tbsp) whole pine nuts that you’ll boil and then remove.

GUM ARABIC : also known as acacia gum, is a natural gum consisting of the hardened sap of various species of the acacia tree. Producers harvest the gum commercially from wild trees, mostly in Sudan and throughout the Sahel, from Senegal to Somalia, though it is historically cultivated in Arabia and West Asia. Gum arabic is used in the food industry as a stabilizer, emulsifier and thickening agent in icing, fillings, soft candy, chewing gum and other confectionery and to bind the sweeteners and flavorings in soft drinks. A solution of sugar and gum arabic in water, called “gomme syrup”, is often used in cocktails to prevent the sugar from crystallizing and provide a smooth texture.

*substitution : perhaps you could try using some guar gum or xanthan gum instead, (often used in gluten-free preparations) unless you don’t use it at all and decide to boil down the syrup longer until thicker (but it might crystallize later), it’s available as little crystals or in powder form, usually 2€ per 50 grams.

Anyways, these ingredients are usually available in bulk spice stores, in Greek and Middle-Eastern grocery stores around the world and even in many organic & natural food shops ! If you live in Montreal, try going to ANATOL SPICES on Saint-Laurent boulevard in Little Italy (I love that place) or if you live in Paris, you can visit the AROMA-ZONE shop or order them from their website in France.

There you go, you learned a few new things today so all is not wasted !

The idea here is that you can prepare my concoctions as they’re indicated or you can create or invent your own blends. These two personal blends are particularly inspired by the winter festivities !

*for 1 cup of syrup each 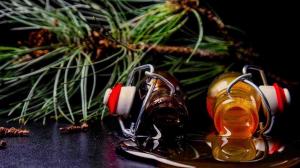 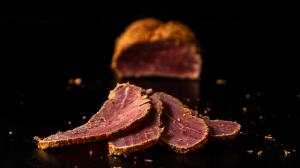 It takes TIME (not active time but waiting time) but it’s worth it. It’s what holiday preparations are all about : Something SPECIAL for a SPECIAL occasion. Imagine...